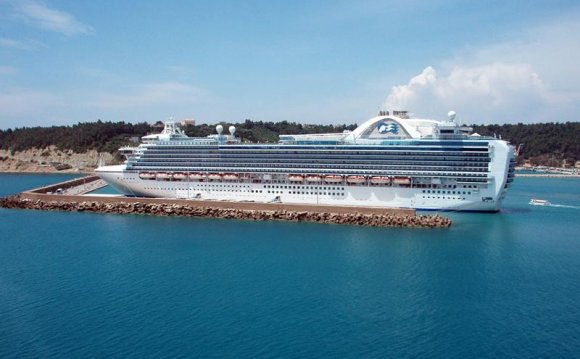 Crown Princess is a Grand-class cruise ship owned and operated by Princess Cruises. Her maiden voyage took place on June 14, 2006, departing Red Hook, Brooklyn (New York) for Grand Turk (Turks & Caicos), Ocho Rios (Jamaica), Grand Cayman (Cayman Islands), and Port Canaveral (Florida). As of 2015, the Crown Princess sails to Mexico for the Winter season, and Alaska for the Summer season. Like her sister ships and her Skywalkers Night Club is built aft of the funnel rather than suspended over the stern. Her godmother is Martha Stewart.

In December 2012, the Crown Princess made a transatlantic crossing from Venice to Galveston, TX where she stayed to run Caribbean itineraries from December 2012 to April 2013. When the ship arrived in Galveston on December 22, 2012, at least 102 passengers had contracted norovirus. The Crown Princess had previously been plagued by two separate outbreaks of norovirus in January/February 2012.

On July 18, 2006 at approximately 3:30 pm ET, one hour after departing her last port of call in Port Canaveral, the Crown Princess reported "listing" or making "heavy turns". The U.S. Coast Guard was contacted shortly after and crews arrived within minutes to assist the troubled vessel. The cruise ship was on its way home to New York City, and the decision was made to return to Port Canaveral due to what was initially thought to be a malfunction in the steering equipment which caused a severe tilting of the ship, and injuries. However, the NTSB found that the second officer, the senior watch officer on the bridge, disengaged the automatic steering mode of the vessel’s integrated navigation system after it put the ship into what the officer felt was an unusually hard turn to port and took manual control of the steering. The second officer turned the wheel first to port and then from port to starboard several times, eventually causing the vessel to list even more, to a maximum angle of about 24° to starboard. The severe listing tumbled passengers, crew members, pool water, and everything else not secured about the decks.

Fourteen passengers and crew members were seriously injured, one suffering breathing difficulties after being hit in the chest by an airborne chair, and another 284 had minor injuries. Water from the four on-board pools poured into staircases and lift shafts. Most injuries were on the outdoor areas of Decks 15 and 16, where large beach chairs and tables hit and injured passengers. The other area that had many injured passengers was the balcony areas in the grand atrium. Many there were hit by falling objects and heavy marble tables. One woman who had an extended hospital stay was thrown against the glass wall on Deck 15 and covered by pool chairs and water from the pools themselves, being trapped underwater for several seconds. One passenger said "Afterward it was like a war zone with people walking around bleeding." and another added "All the windows were smashed. The top deck looked like a hurricane had hit it." No passengers or crew went overboard.

At 8:30 AM PT on July 19, Princess said that "approximately 240 passengers [were] treated onboard for various injuries such as abrasions, bruises and fractures, of which 94 were transferred to local hospitals ashore for evaluation and treatment." This makes the incident one of the worst in the history of modern day cruising.