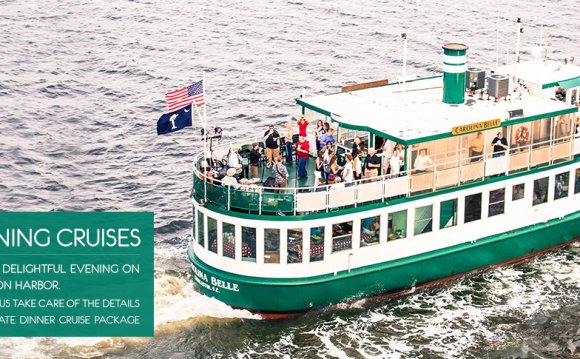 Come aboard the Carolina Queen. We have partnered again this year with local blues legend, Shrimp City Slim for a fantastic sunset cruise featuring amazing live music, breathtaking views of the "Holy City" and Charleston's best BBQ from Fiery Ron's Home Team BBQ! This cruise is perfect for date night, groups of friends, group outings, or any occasion.

Gary Erwin (aka Shrimp City Slim) is a keyboard player/singer/songwriter based in Charleston, SC. This year, 2015, he is celebrating twenty-eight years as a full-time professional musician. Shrimp City Slim has released 8 CDs to date and plays throughout the Southeast and overseas. A new CD entitled "Star Marina" was released February 12, 2013.
While aboard the Carolina Queen listening to the blues, you'll get close-up sunset views of the Holy City's most famous and charming sights, including:

Party the way the locals do... with Charleston Harbor Tours, and The Shrimp City Slim Band!

What Is Not Included?

Your fantastic sunset boat ride is included with LIVE Blues from Shrimp City Slim and his rockin' band or a host of other guest Blues Artists throughout the year. A delicious buffet will be provided by Fiery Ron's Home Team BBQ, including pulled pork bbq, smoked chicken, mac n cheese, cole slaw, buns and sauces on the side as well as sweet and unsweet tea. The City Marina has paid parking available. Parking vouchers can be purchased as an extra while in the checkout process. Alcoholic beverages are not included in this cruise, but we do have a fully stocked bar on board with beer, wine and cocktails avaialble for purchase. Taxes are included in the ticket fee.

The company specializes in introducing its guests to the beauty and history of Charleston, the Holy City. Your captain and staff will be eager to make your experience aboard the Carolina Queen a pleasant and enjoyable one.

The Carolina Queen is Charleston Harbor Tours newest vessel featuring 3 decks for entertaining, a working paddewheel, smokestacks, 2 bars and spacious restrooms. The Main Salon is enclosed and climate controlled and the top deck is open to enjoy the lovely Charleston weather and breathtaking views!