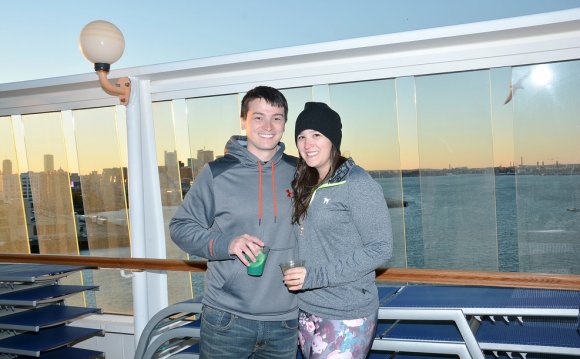 I recently returned from my 2nd Annual Girls Trip. A group of my girlfriends and I instituted this tradition last year in efforts to set aside time for just us to get away and leave behind the work worries, boyfriends/husbands, families and kids for a moment. You always need quality girl time! Last year it was a weekend in Mystic, Ct (You can find out more about our past adventure up on the blog Small Chick Big Deals which I also contribute to: ). This year it was Norwegian Cruise Line’s “Cruise to Nowhere”.

I received many questions from friends and family about what this so-called Cruise to Nowhere actually entailed. I thought what better way to share what this unique trip was all about then to blog about it!

So what is the Cruise to Nowhere? Norwegian Cruise Lines has set up a handful of 1 and 2 night itineraries (Out of NYC and New Orleans) on some of their ships that depart and return to the same port of call without any stops in between. Our cruise left out of NYC on a Friday afternoon and we were returned on Sunday morning. The ship simply takes a ride out into the Atlantic for a day or two and then comes back.

You’re offered the same level service and activities that would be on a longer cruise. There were nightly shows and entertainment, full service in all of their food facilities, and the deck outside was fully operational (Pool and all…even though it was only 40 degrees out!) during our stay.

I have compiled my own personal list of pros and fun features of the ship (The Norwegian Breakaway- which was recently Awarded Best New Ship – Cruise Critic Editor Awards) along with some of the “misses” I encountered along the way.

The Climbers getting ready!

The Rock Wall we were about to challenge

Sonia taking on her climb

view from the top of the ship’s deck

We saw all walks of life on this ship…couples, families, bachelor & bachelorette parties, and girls getaways (like us!). I thought the age range varied quite a bit.

The Norwegian Breakaway’s next Cruise to Nowhere voyage is not until January 16th of 2015 out of NYC. You have plenty of time to get booked!

If you would like to try another one of their ships you can leave in November of 2014 on the Norwegian Gem out of NYC or the Norwegian Dawn in New Orleans.

All in all I thought this creative weekend getaway concept was a winner. I would do it again in a heartbeat and just put extra money aside to eat in the surcharge restaurants (We found the food quality to prove better in these establishments). If you decide to embark on one of these trips I hope you have as great of a time as we did!

Glow Party on the Norwegian Breakaway Cruise to Nowhere

GoPro: Cruise to Nowhere on the Norwegian Gem 2014