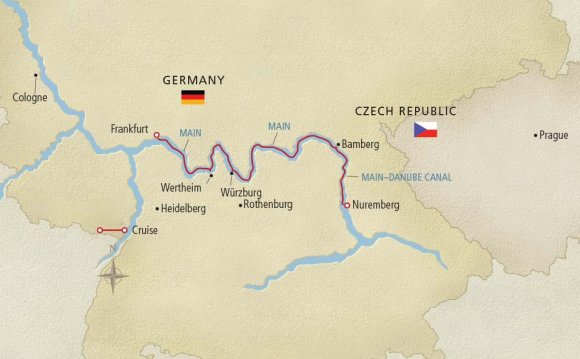 Known as the Moselle to the French, the Modella to the Romans (who first named it) and the Mosel to everyone else, the river is one of the Rhine's longest tributaries, covering roughly 340 miles from its source at Ballon d'Alsace, high in the Vosges Mountains in France, to its end when it joins the Rhine at the city of Koblenz, Germany.

In between, it flows through Lorraine, one of France's most historic regions and the homeland of Joan of Arc. The Moselle also forms an aquatic border between Luxembourg and Germany and passes Alpine valleys, medieval towns, verdant vineyards and fairytale castles.

Like most of Europe's great rivers, the Moselle features both industrial stretches and scenic regions. That said, the Middle to Lower Moselle (where the river snakes its way from Trier to Koblenz through a series of steep bends) is just lovely. The winding route prevents overdevelopment and endows its banks with a timeless air and rich heritage of ancient castles and quaint medieval villages.

The more industrialized parts of the Moselle Valley, where the river is a key artery for transporting goods, are also interspersed with gorgeous scenery in a quickly changing landscape. So be prepared to take a bit of rough with a lot of smooth while savoring fine Riesling wines and venturing ashore to explore wonderful places like Trier, Germany's oldest city.

Moselle itineraries vary, from five- or seven-day Moselle cruises between Koblenz and Trier to sailings of eight or nine days (or more) combining the Moselle with the Rhine and - on longer journeys - with other rivers like the Neckar and the Main.

Weeklong cruise: A typical seven-day trip begins at the walled riverside town of Andernach, near Koblenz, then visits the town of Cochem, which has a rich Romano-Celtic heritage and is gateway to the imposing Reichsburg Castle and the medieval village of Beilstein (all in Germany). Next, you might take in Bernkastel, the Moselle's "wine capital, " notable for its medieval marketplace and handsome half-timbered houses.

Trier, Germany's oldest city, is next, followed by Traben-Trarbach, gateway to Luxembourg. From there, riverboats head back to Koblenz via Cochem, with side trips to the vineyards of Winningen and medieval Lahneck Castle.

Rhine and Moselle combo: These sailings start similarly but go on from Koblenz to Rudesheim via the castle-lined Rhine Gorge. Ships typically call at Boppard before returning to Koblenz. (For more info, read Rhine River Cruise Basics.)

Other combos: Multi-river itineraries also begin in Koblenz and visit Rudesheim but then head up the Main River to Frankfurt and back down to Mainz. From there, ships sail up the Neckar River to Mannheim, the gateway to Heidelberg and seat of Germany's oldest university. Then, Boppard, Cochem and back to Koblenz. During the Christmas season, itineraries are chosen to make the most of the traditional markets that anchor most towns for the holidays. (For more info, read our Main River Cruise Basics).

Longer, 15-day itineraries combining the Moselle with other rivers typically sail between Amsterdam and Basel, calling at Cochem, Bernkastel and Koblenz.

May to September are generally the warmest months for a Moselle cruise, with peak temps in July and August when riverside towns like Traben-Trarbach, Bernkastel and Winningen hold their annual wine festivals.

These events are well worth witnessing; towns are decked in flowers and ribbons. Festivities include concerts, fairs, firework displays, oompah bands, processions and, best of all, lots of wine.

But the river can be at its best October, when autumn colors gild the landscape and temperatures are warm and pleasant but not hot enough to make sightseeing a drag.

Most main attractions stay open until early November, so this is also a good time to see the sights without so many crowds. And both Boppard and Piesport have autumn wine festivals early in October, so pick the right itinerary and you won't miss out.

Then, of course, there's Christmas - a magical time all along the Moselle, when most of its towns host glittering Christmas fairs from mid-November until Christmas Eve (see Port Highlights for details). Bundle up, grab a mug of gluhwein and enjoy.

Trier: Founded by the Roman Emperor Augustus in 16 B.C., Trier (or as he called it, "Augusta Treverorum") is the oldest city in Germany and one of the oldest in the world. By the third century A.D., the city had become the center of Rome's western empire and played host to its emperors. Trier was developed in such spectacular imperial style that it came to be known as "Roma Secunda, " the second Rome.

This rich heritage is found everywhere - in its ancient amphitheater, Imperial thermal baths and spectacular ancient gate, the Porta Nigra (the largest and best-preserved Roman gate in Northern Europe).

See the Best of Germany Aboard a Vantage Deluxe River Cruise