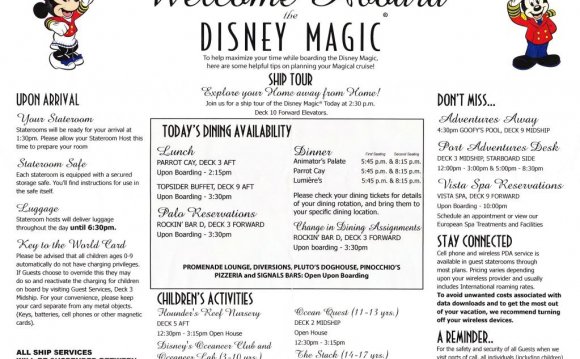 Disney cruises can be expensive, but you do not have to choose between sailing with Mickey and sending your children to college someday.

During peak summer and winter holiday seasons, Disney’s least expensive inside staterooms can cost more than $1, 000 a night for a family of four. At other times though, even desirable cabins with verandahs can be booked for less than half that amount.

To get a good deal on Disney Cruise Line, it helps to understand the Walt Disney unit’s unique position in the marketplace that keeps prices high, said Carolyn Spencer Brown, editor-in-chief of Cruise Critic, a review and travel information site.

That means the usual bargain-hunting strategy of booking at the last minute often will not work. In fact, fares typically rise over time as the ships fill, said Adrienne Vincent-Phoenix, CEO of vacation resource site MousePlanet and a veteran of 20 Disney cruises.

Rather than discounting fares for poorly selling cruises, Disney tends to offer “kids sail free” promotions or other add-ons, she said.

Savvy buyers are already snapping up the least expensive and most desirable cabins for next summer, Brown said. For high-season travel, “you need to plan at least a year in advance, ” she said.

Vincent-Phoenix recommended first-time cruisers use a travel agent to help sift through the possibilities and wrestle with logistics. She suggested looking for agencies with “Earmark” or “Authorized Disney Vacation Planner” designations, who have special training and understand the cruise line’s historical pricing patterns.

Booking through a travel agent typically costs no more than booking directly with Disney, and many agencies offer incentives such as shipboard credits of a few hundred dollars to book through them.

Those credits come in handy, because cruise ships offer plenty of ways to spend money on top of fares. While Disney ships do not have casinos, they do have spas with costly treatments, and therapists who push expensive products. Disney-sponsored excursions, souvenirs and professional photography packages can inflate the bill, as can the aforementioned adults-only restaurants, which charge additional amounts ranging from $35 to $85 per person.

In some cases, the add-ons are worth it. We had amazing meals at the restaurants on our ship, and the week-long pass to the spa felt like a good investment at about $100 each.

On the other hand, we found most of the excursions overpriced. We booked a good all-day snorkel trip at St. Martin via TripAdvisor.com for much less than Disney charged. At Castaway Cay, Disney’s private island in the Bahamas, excursions are quite unnecessary. There is plenty to do for free.