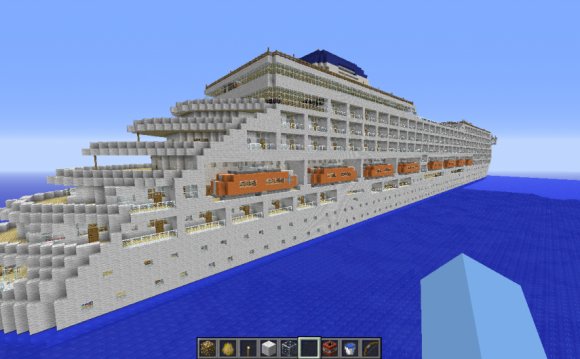 From water level, cruise ships can look like confounding, imposing towers—but in Jeffrey Milstein’s series of aerial photographs, “Cruise Ships, ” the amazing designs of the floating behemoths seem clear and even beautiful. “Most of them have pools. They almost all have a putting green, a running track, a basketball court. The whole top deck becomes this kind of floating amusement park three football fields long. It's an amazing construction, ” he said.

Milstein has been interested in planes, ships, and other vehicles since he was a kid, and in the last 15 years he’s become known as a photographer particularly adept at making our greatest machines look good. (We featured his series, “Flying, ” on Behold in 2013.)

Before “Cruise Ships, ” Milstein had spent time taking photos of small motorboats in New York from a bridge as they floated underneath. But 1½ years ago, he decided to go bigger, which was when he flew to Florida’s Port Canaveral, where millions of cruise passengers embark on vacation each year. In the time since, he’s also photographed ships in Fort Lauderdale and Miami for his ongoing project.

Milstein photographs the ships from the passenger seat of a helicopter flying somewhere between 900 and 1, 400 feet in the air. He works with a fully manual camera, so he can only take one photo every time the helicopter swoops above the ship. In an hour’s time, he gets only two or three chances. There’s no door on Milstein’s side, which gives him a better angle and eliminates obstructions.

To minimize shaking, Milstein mounts his camera on a gyroscope, which he holds during the flight. “It weighs quite a bit, which is why I just had a trip to the physical therapist for my shoulder, ” he said.

The effort, Milstein said, is worth it. When all goes well, his 80-megapixel photos are so clear, viewers can see the smallest details on the ship, and life onboard is fully illuminated. “You see all the people in their pools and lying on their chairs and playing golf and running on the track. It's almost voyeuristic to look at it all going on.”