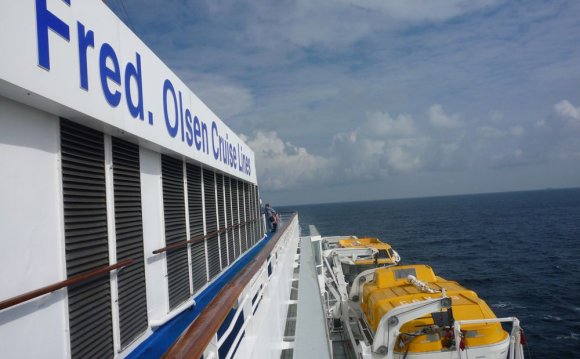 Decent way to save money since room and board is included, however working the same hours somewhere where overtime was paid 1.5x would get you a lot more. 12-hour days for deckhands can be counted as time and a half for sea service towards a coast guard license if you're on that track. Good way to travel depending on the route and your shift in different areas.

I'd like to second a lot of what the review entitled “Assessment of American Cruise Lines from the perspective of a knowledgeable, experienced deckhand" has to say so if you have the time to read it before applying I highly recommend it (though I did not experience many of the issues relating to cleanliness that he did, and obviously other factors vary from boat to boat). In brief, the onboard environment typically ranges from slightly negative to soul-crushing due to unrealistic standards, silly corporate regulations, lack of consistency, and coworkers who don't pull their weight. In more detail: Unless their was a caring chef onboard meals were subpar and nutritionally lacking. Planning for crew trips to, from, and between boats was ALWAYS last minute and disorganized, even the captain wouldn't know when new crew would be arriving at times. Deckhands will nearly NEVER have twelve hours off since it's all hands on deck for docking, undocking, and drills which might happen up to three times when you would otherwise be "off, " interrupting your sleep and leading to fatigued workers at the beginning of their shifts which only gets worse as the day (or night) goes on. Hours might also be extended when crew members left or were fired (not an uncommon occurrence) and someone was needed to pick up the slack since there were zero redundant or easily transferable positions onboard, though having just one crew member like this would make the rest of the crew's life much easier. Treatment of both stewards and deckhands depends HIGHLY on the management which rotated on a regular basis (every couple of weeks) and with ever new manager there were new "correct" ways of doing things and new behaviors that could get you in trouble. Some cared about the crew more than others but even those that were "on our side" could only do so much due to the strict corporate regulations that punished any effort to make the crew's life easier if it meant breaking protocol. When corporate suits did come on board it was only to criticize and correct, they did not listen to crew complaints and often it was better to stay away from them than it was to speak up. ACL as a company also takes advantage of its passengers, charging ridiculous prices for advertised local food, environmentally friendly boats, luxurious service, and "small ship cruising done perfectly, " none of which is true. Whenever passengers figured this out and were upset at some aspect of the cruise that...