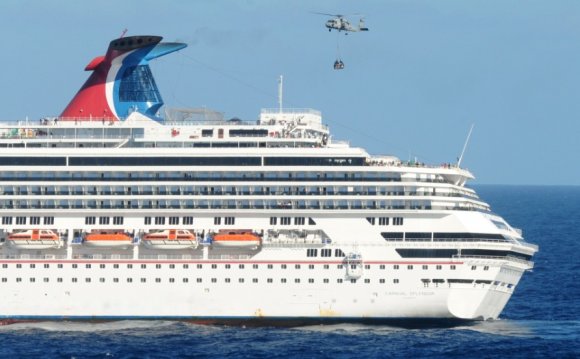 These are some of the most interesting cruise ship technology related data and facts -, , , , and something about (in-article navigation links).

This cruise vessel technology related survey is integrated with our articles on passenger ships building and safety, and the statistical ones about registry/flag-states, cost to build, speed, passenger capacity. All ship links redirect to the vessels's "itinerary-schedule-current position" page.

Without a source of power, these huge cruise vessels would be nothing more than drifting aimlessly hotels. A large number of older ships use diesel reciprocating engines for generating power for propulsion. Cruise ship engine power is supplied through transmission to the propeller shafts. These transmissions determine the revolutions of propellers. Modern ships use either diesel electric engines or gas turbines as a source of power for propulsion, and for ship's systems. Some of the larger ships depend on two power sources - one for electrical power and one for propulsion.

Gas turbine engines, as being aero derivative, generate heat which is transformed from mechanical energy in electrical power. Compressed air is fired in combustion chamber, to achieve this. Hot exhaust is made over a turbine which spins to drive mechanically a shaft. The power can be used to spin the electrical generators. The same way do diesel-electric engines work, yet they use direct drive system, not a turbine. The output shafts, to produce electrical power, are connected to the electrical generators.

Both engine types need a lot of fuel. Cunard QE2, for example, consumes daily 380 tons of fuel when she's traveling at 28.5 knots speed and carries fuel enough to sail for 12 days. Usually ships fill up at various ports, and use fueling barges as floating gas stations. Vessels use lower-grade diesel which tends not to burn as purely as diesel-powered road-going vehicles.

All ships rely on the propellers to be pushed through water. These, referred to commonly as screws, provide forward and reverse motion. Airplanes, for example, require tremendous speeds of propellers to provide forward motion for flight, but ship propellers don't need to turn so fast and rely on torque power. Therefore, they travel slowly, and rarely top 30 knots (for more info follow our speed-link above).

The basic detail about the cruise ship engine room is its location. Ships' heaviest weights have to be situated at the lowest possible place because of stability, and usually engines are mounted above the keel. Ship's lowest decks are almost entirely full of machinery. An area creating enough power for driving such an enormous vessel through water needs to be really big - very often engine rooms occupy at least three decks. But rather than long halls stretching length of hulls, machinery is almost always divided into smaller compartments - one might house main engines, and another might contain air-conditioning system. This compartmentalization is for safety reasons.

If a penetration to the hull or fire happens, multiple compartments help contain the damage. See at the right the Allure of the Seas cruise ship engine room:

Rarely, engines are not placed at the bottom of ship - four main diesel engines on RMS Queen Mary 2, are placed above the keel, and two smaller gas turbines are on top, aft of funnel.

An interesting fact is that it was not unusual for older liners to feature two engine rooms. Gradually, technology allowed consolidation of engine spaces. However, legislation today requires vessels to have equipment duplication and two engine rooms.

Today's direct-drive diesels feature one main advantage - the option to use shaft generator, which is a device using the circular motion of propeller shaft in order to generate electricity needed for hotel services, like cooking and lighting. Shaft generators can be used only while the ship is moving with fairly constant cruising speed. This is what the NCL Epic cruise ship engine looks like:

Almost all new ships feature a diesel-electric propulsion form. On these ships, main engines are not connected to propeller shafts, and instead of it they are directly connected to big generators in order to produce electricity, which is sent in turn to electric motors, that then power and help turn the propellers. Main advantage of the diesel-electric cruise ship engine systems is efficiency as they allow main engines to operate near the most efficient speed, no matter if the ship is moving at 5 or 25 knots.

Losing electrical power is devastating to ships. Main engines and generators require electricity and it's needed to keep them going. Pumps that are driven electrically take in cold water from ocean to cool the engines, and electrical pumps get fuel from fuel tanks and supply it to the engine. Electrical power is vital for many operational functions - without it, ships come to a halt.

Large equipment (propulsion motor, bow thrusters) requires electricity of high voltage. As for smaller machinery (cabin lights, galley equipment), the electricity goes through transformer and is thus stepped down into lower voltage. Large cables snake through all the ship to distribute electrical power. They carry power from generators to switchboards, through passageways, public rooms, crew and passenger cabins. Cabling can be the weak point in the distribution system. If the electrical cables aren't truly redundant, even ships that feature two engine rooms suffer power failure.

All ships are supplied with emergency generator to maintain vital electrical power. Backup generators are located higher up and also outside engine room spaces to isolate them from damage or fire. Big ships require much power, so they might have more than one emergency generators. Despite that, they don't have the capacity of main generators and engines, don't produce electricity enough to move the ship, and can't supply all the power needed in ports, because of constraints in space. Emergency generators are instead used only for essential navigation systems - crucial communication equipment, critical pumps in engine room, emergency lighting. Should they also fail, vessels are required to have a battery backup. 24 hours of power are at least provided by battery rooms to smaller emergency equipment list.